Where He Ends & I Begin

For best friends Jake and Nate the question isn't how they ended up in bed together but how they stay there.

Aggressive, physical, and brave, Jake Owens is a small town football hero turned big city cop who passes his time with meaningless encounters believing he can’t have who he really wants: Nate Richardson, his best friend since before forever. Thoughtful, quiet, and kind, Nate is a brilliant doctor who has always known who he is and has never been able to shake his crush on loyal, courageous, straight Jake.

After a passionate night together, Nate realizes Jake isn’t as straight as he assumed, but he worries that what they shared was a fluke, a result of too much closeness for too long. For Jake, the question isn’t how they ended up in bed together because he has always known that Nate holds his heart, it’s how he’ll convince Nate that he wants and needs to stay there. 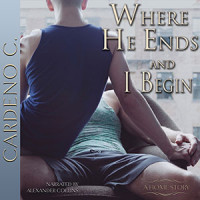 Download a FREE Where He Ends & I Begin audiobook when you sign up for an Audible 30-day free trial here! 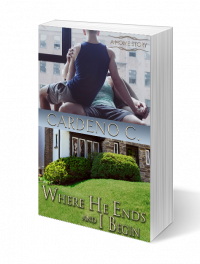 I looked over at the body next to me—long legs, flat stomach, smooth chest—and closed my eyes, wondering how the fuck I got here. Not literally, of course, because “here” is the bed in my hotel room. I know damn well how I got here. But “here” as in how did I get to a place where I want—no, where I need to touch another man; to feel that stomach, that chest under my fingers and those long legs wrapped around me. And not just any man—Nate. My best friend since the day I was born. And that I mean literally.

Our mothers had grown up together in a small Southern town. Next door to each other, in fact. My mom was the fifth child in her family—four older brothers. Nate’s mom was third in a family of eight, also the only girl. Both wanting to get away from…

The story begins in spring, 2006 and spans ten months. Throughout the story, there are flashbacks to earlier years.

If you like strong men with soft insides and romance that is full of heart along with misunderstanding, I would highly recommend this book!

I just have to stress the fact that I love this book .