Aaron has waited years for a man who can share his heart and he insists it's party boy Zach.

Not even his mother’s funeral can convince self-proclaimed party boy Zach Johnson to tone down his snark or think about settling down. He is who he is, and he refuses to change for anyone. When straight-laced, compassionate Aaron Paulson claims he’s falling for him, Zach is certain Aaron sees him as another project, one more lost soul for the idealistic Aaron to save. But Zach doesn’t need to be fixed and he refuses to be with someone who sees him as broken.

Patience is one of Aaron’s many virtues. He has waited years for a man who can share his heart and complete his life and he insists Zach is the one. Pride, fear, and old hurts wither in the wake of Aaron’s adoring loyalty, and as Zach reevaluates his perceptions of love and family, he finds himself tempted to believe in the impossible: a happily-ever-after. 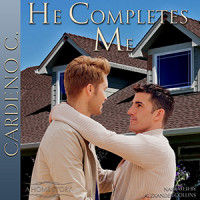 Download a FREE He Completes Me audiobook when you sign up for an Audible 30-day free trial here! 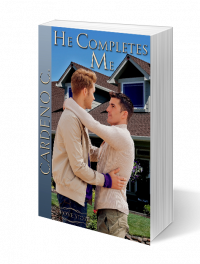 “Come on, Zach. This is going a little overboard, even for you.”

My friend, Luke, sat on a closed toilet lid, watching me apply eyeliner. I held the pencil back and looked over at him.

Luke sighed and put his head in his hands, elbows resting on his knees.

“I know, Zach. I’m not telling you to change. I’d never do that. But this isn’t a club opening, it’s a funeral.” He paused, looked me up and down, and then repeated himself with more emphasis. “It’s your mother’s funeral.”

I shrugged and finished my eyeliner. He was right, of course. The look I was going for here wasn’t just a little overboard—a skin-tight, pink tank top and white pants that…

If you are looking for a book that has a strong and fast-paced storyline that revolves around two amazing characters that have a love that will live long in your heart, then you’ll love this book!

What a great love story! Cardeno C. just does it for me.

He Completes Me is such a sweet love story.

This story is a true "happily ever after" . ...He Completes Me is a relationship story that follows Zach's POV from before he meets Aaron until they become fully integrated into each others' lives, extended family and all. I loved being Zach's head. He lived a hedonistic, fast-paced life before Aaron and his perspective is charmingly abrupt and open-minded. ... If you're looking for a sweet, dependable love story that doesn't use gimmicks to pace through the plot, check out He Completes Me.