He Completes Me Excerpt

“Come on, Zach. This is going a little overboard, even for you.”

My friend, Luke, sat on a closed toilet lid, watching me apply eyeliner. I held the pencil back and looked over at him.

Luke sighed and put his head in his hands, elbows resting on his knees.

“I know, Zach. I’m not telling you to change. I’d never do that. But this isn’t a club opening, it’s a funeral.” He paused, looked me up and down, and then repeated himself with more emphasis. “It’s your mother’s funeral.”

I shrugged and finished my eyeliner. He was right, of course. The look I was going for here wasn’t just a little overboard—a skin-tight, pink tank top and white pants that weren’t any looser. I’d also gotten my brown hair frosted for the occasion. Frankly, I didn’t like it. I preferred the natural color. But I knew it would help complete the picture.

I was driven out of my family for being gay, and I was going to make damn sure they didn’t think they had succeeded in causing me to question myself or to hate who I was. I was going to walk in there confident and proud—and as gay-looking as I could possibly make myself. That way, there could be no question in their minds that I was living my life on my terms. And that I wasn’t ashamed, even if they were.

Luke gave up on talking to me about my appearance, realizing it was a hopeless cause. We had been friends since high school, and he knew me pretty well. I’d moved away after graduation and then stayed away. There was nothing for me back here. My family had pretty much disowned me when they found out I was gay, and I hadn’t had a lot of friends growing up. I stayed in touch with Luke and a couple of other people that mattered in my life, and that was good enough.

“So, I’m sorry that you can’t stay here but with Chris and me both living in this six hundred square foot studio, there isn’t any room for guests. Next time you’re in town, I’m sure we’ll be in a bigger place, and then you can crash with us as long as you want.”

I finished applying the eyeliner, put some slightly shiny gloss on my lips and grooming clay in my hair, and then turned back to Luke. From the look on his face, I could tell he didn’t approve. But he was done trying to talk some sense into me. Smart guy.

“Don’t worry about it. I should stay with Dean anyway. When he called to tell me our mother had died and begged me to come to her funeral, I told him that I’d see what I could do. Of course that meant thanks, but no thanks. But then he pulled out the nephew card and reminded me that I haven’t met his kids. Since I plan on leaving tomorrow, staying at his place is about the only way I can spend any time with them.”

I picked up my toiletry bag, walked out of the bathroom and over to Luke’s couch, where I’d put my duffel when we walked in. He had picked me up at the airport and agreed to let me change at his place before dropping me off at my brother’s house, where I’d be joining the rest of his family for the drive over to the mortuary. After I put the toiletry bag away, I turned to Luke.

“Not that I know shit about kids anyway, but Dean was practically crying on the phone, asking me to come and telling me they have plenty of room to put me up. I’m actually surprised he doesn’t mind exposing his faggot brother to his children, because, as you know, all gay men are pedophiles.”

“Jesus, Zach. Did he actually say that to you?”

I thought back to my conversations with Dean over the years. There hadn’t been many, so it didn’t take long to go through the catalog in my mind. I shrugged.

“Well, no. Not directly. But I heard variations of that theme from my stepfather, my mother, her parents, etc., etc., etc.” I waved my hand as I spoke. “Dean was out of the house by then, so he didn’t have the chance to jump on the bandwagon.” I picked up my bag and opened the door. “But if I’m really fucking lucky, maybe he’ll get his two cents in tonight. I think he at least has the manners to wait until after the funeral. Come on. We need to get going. I can’t wait for the fun to start!”

I walked down the stairs and tried to calm my nerves. I was quiet on the drive over, reminding myself in my head that I was a grown man. They didn’t control my life, and there was nothing that they could do to hurt me, not anymore. The last part wasn’t completely true, of course, but I kept repeating it to myself anyway. I’d been telling myself that same thing for years.

“All right, Zach. We’re here. How’s that for door-to-door service?”

I looked up at the pretty Tudor-style house. There were flowers planted in window boxes and pots, a green lawn, toys on the front porch, and a white picket fence. I felt like I’d arrived at a Norman Rockwell painting.

That was typical of my brother. Mister Perfect. He was a jock and a good student in high school. Then he went off to college, got his doctorate in English, married a pretty blond cheerleader-type, had three kids, and moved back to teach at the local college.

I knew all of this from the e-mails Dean had sent over the years, and from the very brief, very sporadic telephone calls. I had a rule where I forced myself to return at least ten percent of his calls. Seriously, what the fuck did we have to say to each other? The ten percent was painful enough.

Dean was six years older than me, and it wasn’t all that long after he moved away that my family wrote me off. Oh, they let me stay in the house, fed me, clothed me. Basically did what they were legally obligated to do, along with some shit that was definitely not legal. But I wouldn’t let myself think about that, not anymore.

“Thanks for the ride, Luke. I’m glad I got to see you.” I opened the door and stepped out of the car. “I’m sorry I didn’t get a chance to meet Chris. He sounds great, and I’m happy you met someone.”

I didn’t mean that. I didn’t believe in relationships. Fuck buddies, yes. But open relationships never worked, and monogamy was not a natural life as far as I was concerned. Why limit yourself to one guy? Variety was the spice of life, after all.

“Well, you can meet him next time you’re here.”

I raised my eyebrows at him in a look that clearly said that was never going to happen. Not because I didn’t want to meet Chris, but because I was never fucking coming back. I actually considered asking him to drive me to the airport right then, but my brother’s door flew open, and he came running out to greet me.

“Zach! I’m so glad you’re here. Thank you for coming.” He took me into his arms and hugged me tightly. “Where are your bags? I’ll carry them in for you.”

I pointed to the bag on the backseat.

He furrowed his brows. “That…that’s it? Just the one bag?”

I could hear the disappointment in his voice. What was that about? Did he expect me to bring a bunch of gifts for his kids? I wasn’t even sure how old they were. Actually, I stood there trying to remember their names.

Dean picked up the bag, slung it over his shoulder, and held his hand out to Luke. “Luke, right? I’m Dean Johnson, Zach’s brother. Thanks for getting him from the airport. I offered to pick him up but—”

And with that, my friend drove away and left me at the gates of hell, deceptively decorated to look like a Martha Stewart magazine. 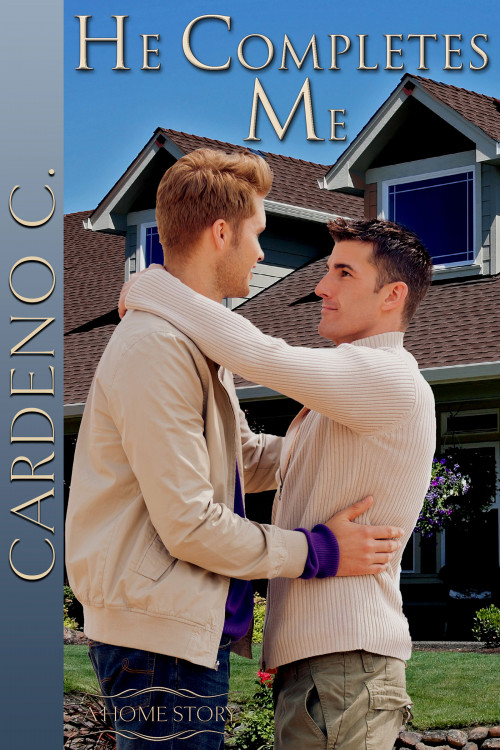