I’m going to confess that this here was not how I had seen the night going. Trapped in a dark—and, might I add, stinky—alley. Surrounded by bloodsuckers. Two pack mates in wolf form passed out against the wheel of a truck, not clear whether they were living or dead. The rest of our ragtag crew had already skedaddled, frantic to make it home so they could lick their wounds before they passed out. And the tall, fierce vampire responsible for fully half of the pummeling we’d taken still looked fit as a fiddle as he stalked toward me. His long black hair blew behind him while he swiped his hands on his shirt to remove shifter entrails, spit on the ground to ensure that the blood in his mouth wouldn’t get absorbed into his system, and glared at me furiously.

“Ralph, don’t,” Scariest-of-Them-All growled at the bloodsucker that had me pinned against the rough brick. Blood oozed out the sides of my neck and both wrists in a steady flow, a puddle already forming around my feet, my heart finally, blessedly slowing.

Pinning-Me-To-The-Wall vampire, the one he called Ralph, held both of my wrists above my head with one hand and had just moved his free hand to my belly, claws at the ready, when the order to stop registered. He looked back over his shoulder, but didn’t release me. Not that I could have gotten away even if he had loosened his grip. There were seven of them and one of me. Plus, they were bigger, stronger, older. I chuckled at the last thought. They were immortal; of course they were older.

Ralph jerked his head back and scowled as he shook me. “You think this is funny? Are you laughing, dog?” He spat the last word.

My head flopped from side to side, my neck feeling limp as a cooked noodle. Huh, I felt almost…almost good. I mean, I was bleeding like a stuck pig and dying and all, but dang. Everything inside was looser, easier, like I’d been suffocating all my life and I finally had room to breathe.

“You are,” he said incredulously. “He is,” he repeated for the benefit of the other vampires. He was using the same volume level, so I wasn’t sure why it was necessary, but whatever. I shrugged, or at least I tried to shrug. I definitely shrugged in my mind. Could shrugs be mental? “Glad you think it’s funny, because it’s the last thing you’re ever going to feel.” He pressed his claws against my belly, cutting through my shirt and just piercing my skin. “Say goodbye, doggy.”

Ralph shook me one last time and then let go. I slumped against the wall, barely able to stay on my feet. I wondered whether that was what being drunk felt like. I’d never been drunk. Maybe I should have tried it. Oh, well. Pretty soon, it wouldn’t matter none anyhow. Nothing would matter ever again.

“Fine. You want the kill, Miguel, he’s yours,” Ralph said, and then he spit at me. It landed on my leg, I think, but there was so much blood it was nigh on impossible to tell. “I don’t need any more of their poison on me anyway.”

From the corner of my eye, I could see my previously prone pack mates moving. They were alive. With the bloodsuckers staring at their comrade approaching his next victim (uh, that was me, in case it wasn’t clear), Harold and George were able to drag themselves away. Good.

I turned my attention back to the threat slash salvation at hand. Coming at me in slow, steady footsteps was Miguel, the scary vampire who had maimed most of my pack mates and was apparently gunning to add me to his accomplishment tally, the one with the gorgeous long black hair and the— Wait, gorgeous? How much blood had I lost? Enough that death was imminent. Not that I minded.

That was, after all, the whole reason I had agreed to go on the vampire-eradication mission with the other males my age. Hell, it was the reason they had, for the first time since we were toddlers, let me join them for anything.

An unarmed shifter who couldn’t shift wouldn’t survive a confrontation with a coven of bloodsuckers. We all knew that going in. The others were there to defend the pack from our most detested enemy and gain notoriety for years to come. Me? I was there to die in the only honorable way my twenty-year-old brain could think of.

But like I said, things didn’t turn out like I’d expected. Because the closer that bloodsucker named Miguel got to me, the more I felt blood pooling somewhere other than around my shoes. My pants weren’t tight, but, unlike the rest of my body, my prick wasn’t small, and in its erect state, it didn’t have enough room to hide. I wondered if their kind could see well at night. Probably. They were nocturnal, like our wolves, so if they couldn’t see well in the dark, they wouldn’t be able to hunt, wouldn’t be able to feed. Oh, Lord, feed.

What would that feel like? I stared at Tall, Dark, and Deadly and wondered how it would feel to have those sharp fangs pierce my vein and suck the blood from my body. My knees buckled at the thought. The vampire’s gaze met mine. He licked his lips and that was it. Endgame. I was done, twitching and gasping as I coated the inside of my drawers with my release.

His eyes widened in surprise and his graceful steps faltered. Sure enough, they could see in the dark. Or maybe they had a heightened sense of smell.

Miguel got even closer, and I was finally able to track his scent over the millions of other foreign odors in the filthy half-soul street. I trembled with renewed desire.

No. Couldn’t be. Not possible.

He took another step. And then another one. His gaze never broke its lock on mine.

My eyes rolled back in my head, the tightness in my skin completely loosened. The pressure in my chest slowed to nonexistent. And then I was on all fours, peace finally overtaking me, before everything went black. 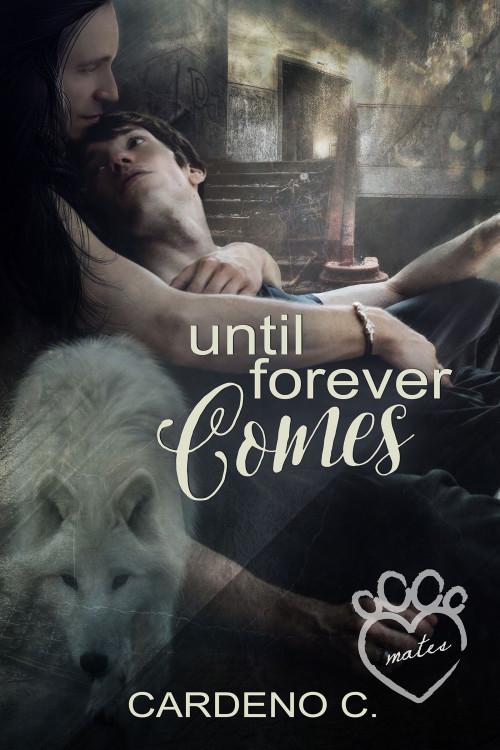