To Touch You Excerpt

“Hi, Mister.” Hand on his forehead acting as a visor, seven-year-old Yoram Smith squinted up at the tall figure standing outside the diner. The setting sun behind him cast his face in shadow, but he moved his head slightly so Yoram figured he’d heard him, even though he didn’t answer. “I’m Yoram Smith. What’s your name?” Rather than responding, the man moved his head in the opposite direction. “Do you live in Kfarkattan?” Oranges and honey. The man smelled of oranges and honey. If he was from Kfarkattan, Yoram surely would have noticed his wonderful scent before now. He didn’t spend a lot of time in the human town, but every few months his uncles came to visit, and they weren’t allowed on pack lands, so he had to leave Miancarem to see them. “I don’t, but I’m nearby in Mian—”

Turning his head to the side, Yoram raised his hand in a wave. “Hi, Uncle Ethan. This is my friend…” He looked back at the nice-smelling man. “What’s your name, Mister?”

“You know better than to run off like that, son. Your mama would be fit to be tied if she heard you were traipsing around town all on your lonesome.”

Only when he got close enough to put his arm around Yoram did his uncle look away from him and at the man whose name Yoram still didn’t know. Ethan took in a deep breath, signaling that he was scenting the man, and then he tugged Yoram closer. “Talking to strangers isn’t safe.”

Yoram didn’t need to hear him say the words to know he meant talking to humans. His pack mates usually called them half-souls, but his daddy had taught him that using that word was mean. One time when Yoram had been up later than he was supposed to be, he’d heard his daddy telling his mom that they were related to a human. It was a big secret. Even bigger than his uncle Ethan being mated to a vampire, which lots of folks knew but chose to ignore.

“He isn’t a stranger. He’s my friend,” Yoram explained.

When Ethan flicked his gaze up again, the man’s posture stiffened and he pulled at the ends of his shirtsleeves. “I didn’t go near your precious ragamuffin.” Scrunching up his face distastefully, he brushed his palms over the front of his pinstriped charcoal vest. “If I had, surely I would have gotten some of whatever he has coated all over his hands onto my suit, and as you can see, I’m perfectly clean.” He waved his hand dismissively. “Maybe you should run along and give the boy a bath.” Shaking his head, he muttered under his breath, “Clearly he needs one.”

Yoram had bathed the night before, and other than a little dirt and possibly some chocolate from the bar his uncles had bought for him, he wasn’t dirty.

With a sigh, Ethan nudged Yoram toward the diner door. “Let’s go inside, son.”

Instincts rebelling at being taken away from the man, Yoram shrugged off his uncle. “But I don’t know his name.” He stepped back toward the man. “What’s your name?”

“Listen to your uncle.” The man rolled his eyes and turned his back on them.

“But I don’t know your name.” How would Yoram find him again if he didn’t know whom to ask for?

“Didn’t you say you had a hankering for french fries? Let’s go inside and order a heap of them.” Ethan wrapped his arm around Yoram, this time gripping him more tightly as he tugged him toward the door.

“Miguel?” The man flipped around and jerked his gaze from one side of the road to the other, squinting. With the sun now fully set, it must have been hard for him to see. Humans didn’t have great night vision. “Miguel Rodriguez? Where?”

Ethan’s hold on Yoram got tighter, and he took a step closer to the door as he looked in his mate’s direction.

Miguel was down the street, heading their way at a steady clip, but suddenly he sped up. No matter how fast his uncle walked or ran, his limbs didn’t move any differently, which gave him the appearance of gliding. But Yoram had learned to judge his speed by his hair. When the long black strands remained flat against his back or shoulders, his pace was a regular walk, but if they floated in the air, his uncle was running.

Managing to reach them faster than an Olympic sprinter, Miguel stepped between them and the human and gruffly asked, “Do I know you?”

Yoram leaned to the side, doing his best to see around his uncle’s imposing frame.

“Salvatore Rossi.” The man held his hand out, and Yoram smiled, pleased to finally know his friend’s name, even if it was awfully long.

“Do I know you, Salvatore?” Rather than shaking the man’s hand, Miguel crossed his arms over his chest.

“In a manner of sorts.” He lowered his arm and tugged at his shirtsleeves. “We’ve…corresponded.”

After a brief delay, Miguel said, “I got your letters and your emails. I’m not interested.”

“I’m sure you’ll change your mind once we’ve had a chance to chat.”

“There’s nothing to discuss.”

“You’re not an easy man to track down, Mr. Rodriguez. Since I went through all the trouble to come to this nothing little town, the least you can do is hear me out.”

“How did you track me down?” Miguel’s voice was lower, darker, and worry flooded Yoram.

Tugging on his uncle’s black T-shirt, he said, “Uncle Miguel. That man, uh, Sal… He’s my friend.” Don’t hurt him.

Miguel tilted his head to the side but didn’t take his eyes off Sal. “Your friend?” The question was asked slowly. “Have you been bothering my family, Salvatore?” Miguel lowered his arms to his sides and squeezed his hands so tightly his knuckles cracked. “Take the boy inside, Ethan.”

“No!” Yoram desperately wriggled out of Ethan’s grasp. “We just met. He didn’t bother me, Uncle Miguel. I swear!”

“Jesus, what’s wrong with you people? The mayor is interested in my proposal to bring new development to this godforsaken area, and he mentioned that you visit this time of year and favor this diner. There is nothing nefarious going on. I simply want to discuss a mutually profitable business deal with the man who owns half the land in and around this Podunk town.”

“My property isn’t for sale.” Miguel’s voice was so low Yoram could barely hear him. “Leave and don’t come back.”

“Are you threatening me?”

“I never make threats, Salvatore.” Miguel stepped forward and, from Yoram’s angle, he looked to be close enough to Sal for their bodies to touch. “But I occasionally feel generous enough to give warnings. Find a different place to develop. Stay away from my family, stay away from this town. Stay away.”

As much as Yoram wanted to keep the human near him, he knew the best thing for him would be to heed Miguel’s advice, so he kept his mouth shut, but he couldn’t stop the tears from falling from his eyes or the whimper from escaping his lips.

Miguel stared at him, unblinking for several long moments, and then he looked at Ethan and arched his eyebrows. Ethan pressed his lips together and shrugged. After another few seconds, Miguel turned back around. “Go see a doctor.”

“A doctor. After you leave here and return to…Las Vegas, go see a doctor.”

“It’s good to know some part of my letters registered with you though I would have preferred it to be my offer rather than the location of my headquarters. In any event, I didn’t come here to get medical advice.”

“No, you didn’t. Consider that a favor”—Miguel stepped away from the man, hunkered down, and lifted Yoram into his arms—“for my nephew.”

“How do you know, Uncle Ethan?”

“Because I believe in fate.”

Scrunching up his face, Yoram looked at his uncle appraisingly and thought about whether that answer made any sense.

“Plus, I have his name, address, and as I recall, at least four different telephone numbers on the many letters and emails he sent to me and my attorney,” Miguel said.

“You hear that, son?” Ethan chuckled. “If you’re destined to see that man again, fate’ll make sure it happens. And failing that, we can count on your Uncle Miguel to take care of business.”

His uncles had never let him down so that answer mollified Yoram enough that he tried to ignore the uncomfortable pressure that had settled in his belly when they’d walked away from Sal half an hour earlier.

“I hear tell from your daddy that you’re a big fan of ice cream.” Ethan set both his forearms on the table and leaned forward. “You reckon you might have a hankering for some right now?”

“Ice cream?” Immediately feeling better, Yoram jumped out of his chair. “Can I get sprinkles too? And whipped cream?”

“Anything you want.” Miguel rose from his seat and held his hand out for Ethan.

“You hear that, Yorry?” Ethan put his hand in Miguel’s and stood. “Miguel’s offered you a blank check. We best skedaddle over to the ice cream shop right quick before he changes his mind.”

“I won’t change my mind.” Miguel put one hand on Ethan’s back and tousled Yoram’s hair with the other. “What good’s being an uncle if I can’t hop you up on sugar and then send you back to your parents? If I remember correctly, we did that very thing with your father more than once.”

“Well then I want two scoops.” Yoram grabbed onto his uncle’s hand and tugged. “And nuts!”

Miguel threw his head back and laughed. “I told you the kid was sharp.”

“Sure enough.” Ethan laughed and let Yoram pull him along. “And strong.” Glancing back over his shoulder, Yoram noticed a strange expression on Ethan’s face as he looked at his mate. “Real strong.” 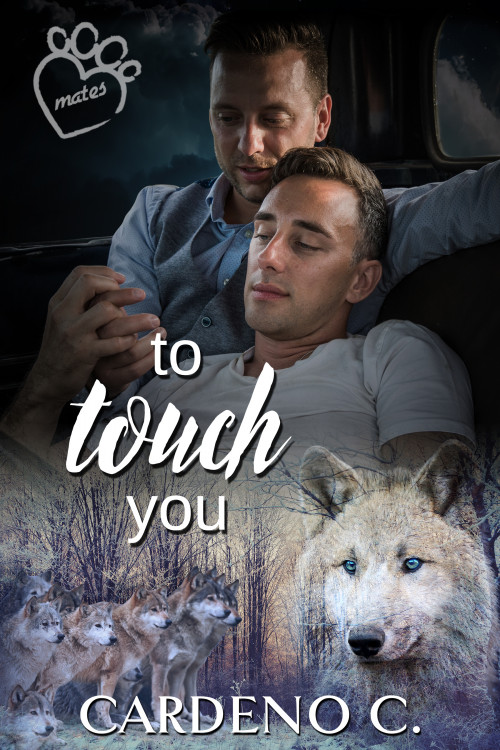