Shifting in the slightly off-balance chair, Kyle Potter looked up from his phone. He was in a bar, surrounded by laughing, drinking, dancing men, but all he could focus on was the too-long to-do list he had left at the office. He blinked at his friend, his brain struggling to change gears from emails to what was supposed to be a fun night out, his first in over a month.

“Cool.” Matthew sat and darted his gaze from side to side. “Is anyone using those chairs?” He pointed to another table.

“Uh. I have no idea.” Kyle had walked into the bar, found an empty spot, and started checking his messages. He hadn’t had time to get a drink let alone scope out his surroundings.

“Table looks empty. I’m grabbing them.” Matthew pushed his seat back, hustled over to the other table, and returned, dragging the two wood chairs behind him.

“What’s wrong with ours?” Kyle asked, twisting around to look at his seat. The bar lighting was dim, but from what he could see, all the chairs looked the same.

“These aren’t for us. Brent and Tony are coming.” He smooshed a chair into the spots on Kyle’s right and left and then plopped back into his seat. “Remember?”

“How can I remember when this is the first I’ve heard of it?” Socializing when there was work to be done had been against his better judgement, but unless he wanted to become a shut-in, he had to make some effort to spend time with his friends so he had accepted Matthew’s invitation to go out that night. Had he known Brent Haralson was going to be there, Kyle would have opted for the hermit option.

“Uh, no, you didn’t.” Hearing the snark in his own voice, Kyle snapped his mouth shut and ground his teeth together. After two years in Los Angeles, he could count his friends on one hand and those friendships were tenuous at best. He couldn’t afford to alienate Matthew. Especially when Kyle’s frustration had nothing to do with Matthew and everything to do with the man he had invited to join them.

On a hot June day his first summer in LA, Kyle had agreed to meet up with Matthew and his friends at the beach. Being sweaty, sandy, and wet weren’t his ideas of fun but he had forced himself to suffer through the social visit, much like he was doing that night at the bar, because that was what friends did. But then Brent Haralson arrived and the day had taken a twist from obligation to genuine fun. The view of Brent’s backside in a small, tight swimsuit had intrigued Kyle as much as his funny anecdotes and insightful comments, and for the first time in as long as he could remember, Kyle’s mind had well and truly traveled away from work. Unfortunately, the good time had come to a screeching halt when Kyle realized the man he was flirting with had neither a job nor the ambition to get one. If there was one quality Kyle couldn’t stand, it was laziness, so as soon as he learned about Brent’s non-employment status, his interest turned to disgust.

Unfortunately, Matthew and the rest of his friends liked Brent. Everybody liked Brent. So, like a persistent and unwelcome rash, the man kept appearing where Kyle least wanted him, which was anywhere in his zip code.

“Must have forgotten to mention it,” Matthew said, shrugging. “There they are now.” He stood and waved his arm over his head.

Unable to stop himself, Kyle sighed, rolled his eyes, and muttered, “Here we go.”

“Brent’s a good guy.” Matthew looked at him pointedly. “I don’t know what your issue is with him.”

Apparently he hadn’t been as quiet as he had thought. Oh well, if Matthew wanted to ask the question, Kyle would answer him. “My issue is that the man does nothing with his life. He’s worthless.”

Kyle clamped his mouth so tightly his jaw hurt. He hadn’t found out about Brent’s wealth until the second or third time he had been around him, and he was ashamed that, at first, hearing the man was rich had made Kyle second-guess his negative feelings about him. But then he had reminded himself that being a contributing member of society was an issue of character not wealth.

“Everyone should work. His silver spoon isn’t an excuse for being lazy.”

After thirty-five years scrimping, saving, and crawling out of the trailer park he had grown up in, putting himself through school, and working twelve-hour days, Kyle had a promising career at Leonard Jones, a top investment firm. He was immensely proud of his achievements. Brent, on the other hand, spat on his advantages and shamelessly lazed about all day. Kyle couldn’t respect a man who didn’t value hard work, no matter how good-looking and charming he was.

“Whatever,” Matthew said, sounding annoyed. “He’s here. Be decent.” He looked away from Kyle and smiled at Brent and Tony. “Hey, we got you seats.”

Great. Now Brent, who made friends as easily as he had inherited money, was creating a strain on Kyle’s limited and hard-earned friendships.

“Hi, Matthew,” Tony said, leaning in to hug Matthew. “Kyle.” He dipped his chin in Kyle’s direction as he sat down.

Distracted by the sight of Brent, Kyle didn’t respond. He would have to put in extra hours at work to make up for the time he lost by coming out that night but he had made that sacrifice, arrived on time, and taken care to dress appropriately. It was called effort. Something Brent, in typical fashion, couldn’t be bothered to make.

“What are you wearing?” Kyle snapped.

Tony looked down at his blue T-shirt and jeans.

“Not you. Brent.” Kyle sneered at the tall, muscular blond. “Tell me something, which decision came first? Wearing sweatpants in public or giving up on life?”

“I’m surprised to see you out and about without that checkered beret,” Brent responded, smoothly sliding into the only remaining empty seat. “How is anyone going to buy your phony French accent trick if you don’t have your props? Or have you given up on that one and decided to go straight to paying for sex?”

“It’s not a beret. It’s a fedora,” Kyle corrected. And it was very fashionable. He had seen it in GQ.

Ignoring him, Kyle continued speaking. “And I don’t need to pay for sex. I made out with a straight guy last month, remember?”

It was the last time Kyle had been able to squeeze in downtime, and Brent had, of course, been there.

“The man made out with you. Ergo, he wasn’t straight.” Brent turned to Matthew. “Have you guys ordered drinks?”

Drawing in a deep breath, Brent returned his focus to Kyle. “In a gay bar. He was wearing pleated pants in. A. Gay. Bar.” Brent shook his head. “That means he has bad fashion sense, not that he’s into women.”

Of course Brent, who was constantly swarmed by more men than the mosquitoes Kyle had fought off during his summers growing up in Alabama, had to diminish Kyle’s conquests.

“Speaking of bad fashion sense…” Kyle squinted. “Your shirt looks like you slept in it and there are holes in at least three places.”

“This is a vintage BWI shirt. It’s practically in mint condition.” Brent leaned over the table and looked at Kyle. “And you’re wearing a suit to a bar because…”

“I had a work dinner tonight,” Kyle said, smoothing down his tie. “Some of us have jobs.”

“And some of us have trust funds that earn more than those jobs.”

Pompous asshole. “Talk louder, Brent. I don’t think every guy here heard you. What’s the matter? Don’t think you can get laid unless someone gets a look at your bank statement?”

Brent leaned back in his chair and crossed his arms over his chest. “What happened to your car?”

“My car?” Kyle pulled his eyebrows together in confusion.

“Yeah. I assume your backseat’s being repaired or something, because otherwise you would have left your jacket and tie there.” He smirked. “What’s the matter, Kyle? Don’t think you can get laid unless someone gets a look at your fancy suit and asks you about your fancy job?”

“Are you as uncomfortable as I am?” Tony said, leaning toward Matthew.

“Nah. I’m good unless they start talking about golf.”

“There’s nothing wrong with golf,” Brent and Kyle said in unison.

Matthew laughed and arched his eyebrows. “See that? Problem solved. If these divas start going at it again, bring up sailing.”

“I had no idea you guys were into golf,” Tony said. “We should play sometime.”

Before Kyle could respond, Brent stood and said, “Who wants a drink? I’ll get the first round.”

“The guy at the door said they’re having a mojito special. I’d love to try that.”

Brent nodded to Tony and then looked at Kyle expectantly.

“A Manhattan.” Kyle crossed his arms over his chest. “Top shelf.”

“You really are.” Matthew did not look impressed.

“I’m celebrating,” Kyle said defensively. “I sold enough shares at the perfect time to get a promotion and put a deposit down on a new condo.” Being able to tell someone his good news had been his primary incentive to leave the office, but of course Brent had to show up and mar his good day. “What did you do today?” He narrowed his eyes at Brent. “Based on your appearance, I’m guessing a shower wasn’t on the agenda.”

“I woke up, beat off, watched TV, beat off again, found an old pack of cigs under the couch, beat off, looked for a lighter, beat off, gave up on the lighter and lit up with the burner on my La Cornue stove that probably cost more than that deposit you earned, and then beat off again.” Brent pressed his lips together, raised his eyebrows, and nodded. “Huh. I guess you were right. No shower.” He flipped around and sauntered toward the bar. “One beer, one mojito special, and the most pretentious Manhattan the bartender can make, coming right up.” 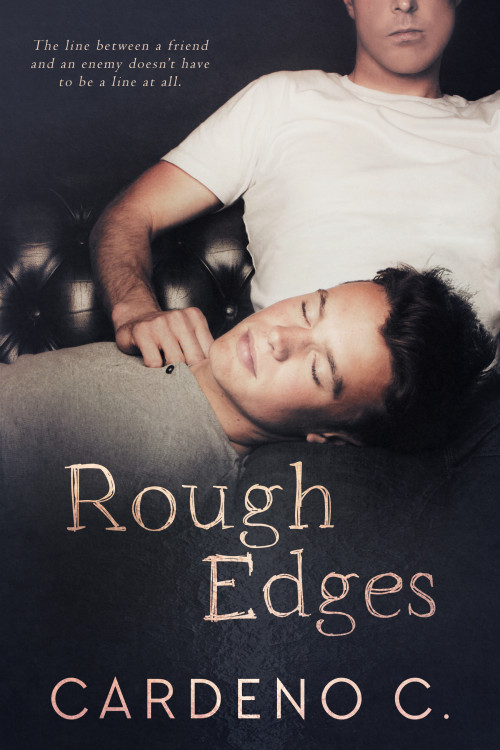