Two Alpha shifters join together to lead their pack and build a family.

Commitment, loyalty, and strength aren’t enough to make Wesley Stone’s birth pack accept an Alpha with a physical imperfection, even if it’s a meaningless mark. Putting the safety of his pack above his own wellbeing, Wesley trades himself for another Alpha and agrees to mate with a stranger in a mysterious, insular pack.

Alphas from Jobe Root’s family have led the Red River pack from the first day shifters walked the earth. Now the time has come for Jobe to fulfill his destiny, but to do that, he needs his mate by his side. Spiritual, easygoing Jobe reveres Mother Nature and trusts in fate, yet he can’t help being nervous about how his mate will react to his new life in Red River, his new life with Jobe.

Two Alphas with contrasting personalities, different upbringings, and divergent beliefs come together for the good of their packs. But to stay together, Wesley and Jobe must see beyond the surface and embrace every facet of themselves and their union. 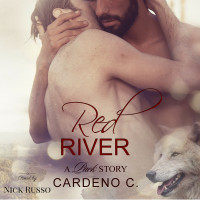 Download a FREE Red River audiobook when you sign up for an Audible 30-day free trial here!

Wesley Stone reached for the volume dial on the cracked dashboard and turned it to the right. Maybe if he could make the music loud enough, it’d drown out the voice in his head.

Time for what? There weren’t any other Alpha wolves in the Purple Sky pack, so everyone knew Wesley would eventually be leading them. What exactly were they waiting for?

Unfortunately, the sound in his head was louder than any rock song. He turned the knob again. He could concede that twenty-three was young to be a pack Alpha, but it wasn’t too young. And his uncle Paul was already sixty, well past the age when Alphas normally handed over the reins. It was time for him to transition leadership to Wesley.

“You’re only twenty-three. Give it…

I like that Cardeno C. can think/write outside the box, and does it so well I can really believe the storyline.

The chemistry between the two is fierce

Paul brought these two characters to life for me. I felt as if I really knew them and really wanted their lives to be intertwined.

This book has it all – The Feelz that I crave, the hotness that I love, the dominating men that I adore – it is essentially one perfect little package.