Quiet but lonely Jared has to decide how much of himself he's willing to risk to keep party-boy Lucas.

Wealthy, attractive Lucas Reika treats life like a party, moving from bar to bar and man to man. Thumbing his nose at his restaurateur father's demand that he earn his keep, Lucas instead seduces a valued employee in the kitchen of their flagship restaurant, earning himself an ultimatum: lose access to his father's money or stay in the middle of nowhere with a man he has secretly lusted over from afar.

Quiet, hard-working Jared McFarland loves his farm on the outskirts of Hope, Arizona, but he aches to have someone to come home to at the end of the day. Jared agrees to take in his longtime crush as a favor. But when Lucas invades his heart in addition to his space, Jared has to decide how much of himself he's willing to risk and figure out if he can offer Lucas enough to keep him after his father's punishment is over. 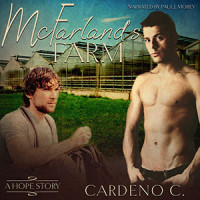 Download a FREE McFarland's Farm audiobook when you sign up for an Audible 30-day free trial here!

Jared McFarland sighed and moved his gaze away from the jumbled numbers on the screen to the answering machine on the other side of his desk.

"I know you're there. Pick up the phone."

Susan couldn't know he was there. She lived in Phoenix, and he lived a hundred twenty-five miles west in Hope, Arizona.

"The reason I know you're there is you never leave your property and it's nine o'clock at night, which means there's not enough light for you to be working outside."

Susan's ability to read his mind terrified him.

"Plus, I know you're on your computer."

"And the reason I know you're on your computer is last time I visited, I uploaded a program that tracks everything you do on there."

Jared froze, thinking through the ramifications of that claim.

After a pause, Susan continued. "Do we need to…

This is a good read that certainly offers a little bit of everything one would want in a shorter read, a strong storyline, some drama, a strong relationship and of course love and romance.

This was a great novella. There are many lessons, sweet and some sexy times. There is a lot to the story in such a small amount of time. I didn't think it was too short. It was perfect for a few hours.

I thoroughly enjoyed how the two men perfectly complimented one another. ....McFarland's Farm is heartwarming, with passion that sizzles and pops. I encourage you to pick it up – this quick enjoyable read by Cardeno C has a lot to offer readers who love a well written romance.

I absolutely loved Jared and Lucas!!! If you're in the mood for a short, loving, and hot romance, one-click McFarland's Farm.