“Hey, handsome. You’re back a day early, ain’t ya?” Sally Bouvier said. She smacked her gum and twirled a strand of her blue hair around her matching blue manicured finger. “I wasn’t expecting ya till tomorrow.”

“Tomorrow’s Saturday and I have the weekday shift.”

“Like ya’d be gone for two weeks and not come see me the second ya got back.” She rolled her eyes at the ridiculousness of that possibility. “Clint Rivera, what kind of fool do ya take me for?”

Technically, he was coming in to check if any of his cases needed his immediate attention or if the sheriff was short-staffed and wanted him to work that weekend. Both possibilities were unlikely in sleepy Hawthorne, New Mexico, but it wasn’t as if anybody was waiting for him at home, which was the very reason he’d packed his two dogs, thrown his camping gear in the back of his truck, and driven out of town two weeks earlier. Clint wasn’t normally one to take a vacation, but he’d had hours accrued and it was use it or lose it. His temper, not the time. And the last thing he needed was another round of anger management classes. Besides, Sally wasn’t all wrong about his reason for coming to the station.

“I picked you up a couple of those date shakes you like on my way into town.” He set a plastic bag filled with ice and two Styrofoam cups on Sally’s desk. “I didn’t want them to melt.”

“Aww, honey, ain’t ya sweet.” Sally jumped up from her chair, hurried around her desk, and threw her arms around him. Well, she tried, anyway. Between the size of her breasts and the width of his chest, it was more like a half-hug. “Did ya get one for yourself, sugar? Ain’t they just the cat’s meow?”

“Uh…” He had in fact gotten one of the infamous date shakes at the truck stop off the interstate, but he didn’t like the sickly sweet flavor and after he’d encountered chunks of what he could only hope were dates, he’d tossed the whole thing. Not that he wanted to admit such sacrilege to Sally. The woman might be half his size, but she ran the sheriff’s office and she’d become an adopted mother of sorts to him since he’d arrived in Hawthorne.

Thankfully, she saved him from answering her question when she leaned back, looked him up and down and then crinkled her nose and said, “Although I do declare, honey, ya surely could have gotten washed off first instead of bringing the campground in here with ya.”

After two years working with Sally, Clint still had no idea what kind of dialect she had or where she’d picked it up. Nobody else in the town, or for that matter, in the state, spoke with her particular twang and as far as he knew, Sally was a Hawthorne native.

“I stopped at home and took a shower.” Rubbing his hand over his smooth cheeks, he said, “I even shaved.”

“Humph.” She walked back to her chair, brushing off her dress as she went. “Darlin’, I got more dirt on me from huggin’ ya just now than I did when Tommy Elders and I necked out by Eagle Nest Lake.”

“Who’s Tommy Elders?” Clint asked as he pounded his hands on his flannel shirt, denim jacket, and jeans. Based on the poofs of dust, he could see Sally’s point. Washing his truck was next on his agenda, otherwise any shower followed by a drive would be pointless.

“He was my high school beau.” Sally sighed happily and smiled at the memory. “Tommy was a real looker.” She appraised Clint. “He had black hair and brown eyes like ya, same with that constant tan, but he was more delicate, like them runway models.”

At six feet two inches tall and one hundred and eighty pounds, nobody ever called Clint delicate.

“You went to school with a model?” he said, surprised that someone from Hawthorne was anywhere near famous and he’d never heard about it. Of the thirty thousand residents in town, twenty-nine thousand were active participants in the rumor mill and the other thousand were too young to talk. Although, to be fair, Clint didn’t interact much with folks outside of work and he’d never been one for gossip.

“Oh, no, honey. Tommy’s a mechanic. Ended up marryin’ a gal just as pretty him, movin’ down south, and havin’ a couple of babies.” She leaned forward and lowered her voice conspiratorially. “Now I didn’t say nothin’, but those kids of theirs were plumb ugly, darlin’. I mean, bless their hearts, but ya couldn’t even look at ’em for more than half a minute without gettin’ queasy.” She straightened up and shook her head. “It just goes to show ya.”

He arched his eyebrows in question.

“A positive times a positive makes a negative.” She untied the plastic bag, picked up one of the cups, and stuck her gum on the lid. “Just like in math, honey.”

“What’s that, darlin’?” Sally took a big sip of the shake and moaned. “Mmm, mmm. Even better than I remembered.” After another sip, she put it back in the bag and stood. “I’m going to head on home and put these in the refrigerator for later.” She patted her hips. “Ya know what they say, honey, a moment on the lips, a lifetime on the hips and with that shindig tonight I surely don’t need the extra calories.”

“What’s going on tonight?” Clint asked with a chuckle.

“Oh, that’s right, ya left before they sent out the invitations.” She leaned down and battled with the bottom desk drawer. “It’s the biggest ticket in town, honey. All the muckety-mucks are goin’ to be there.” Eventually managing to wedge her purse free, she started digging through it. “Earl Landers invited me as his plus one. Nice man. Shame about his wife but honestly, after her first two divorces, nobody expected her to make this one last long.” She clicked her tongue and shook her head disapprovingly.

Clint decided not to point out that she herself had three divorces and two annulments under her sequined, bright teal belt.

“Bill Chiders sure is pullin’ out all the stops for his little girl’s wedding.”

Though he didn’t know Bill personally, Clint had spent half a year listening to his ex say Bill’s name in variations of the same theme: “Bill said reputation is the most important part of being a lawyer. Anyone can put in hours, but to earn the big money, clients have to like you. Once I get a few more clients, Bill will have to make me a partner.”

Clint didn’t suppose there was anything inherently wrong with those ideas, but when a good reputation meant hiding any sort of relationship with him, he couldn’t help but take it personally.

“This was the inside envelope.” Sally yanked a gold envelope out of her bag. “It came tucked in another one. Two envelopes, honey.” She waved it in the air. “And this is just for the engagement party!” She carefully pulled a shimmery package tied in ribbon out of the envelope. “As fancy as they got on the invitations, ya just know the meal’s going to be special.” She thrust the invitation at Clint. “It’s so pretty, I’d have had it framed if that Ewan Gifford wasn’t such a jackass. Pardon my French.” She patted Clint’s shoulder. “I need to go home and do my face, honey. Thanks for comin’ by.”

And with that unwitting launch of a bombshell, Sally walked out of the station and left Clint holding an invitation to his ex-boyfriend’s engagement party. Not that she had any way of knowing that given that their breakup was caused by Ewan’s refusal to come out for fear of ruining his precious reputation and Clint’s frustration at living in the closet after having moved halfway across the country to build his own life. Well those reasons and, it now seemed, Ewan’s having a fiancée. Fucker.

Clint had been out of town for exactly two weeks. Fourteen days. Nobody went from a first date to a lifetime commitment that quickly, which meant Ewan had been seeing his boss’s daughter while they’d been… He couldn’t call it dating considering they’d never gone anywhere outside their apartments, but didn’t fucking the same man on a regular basis for going on half a year m

ean something? It did to him.

Six years in the army, almost all of them deployed to Afghanistan, followed by a two-year stint on the Detroit police force had taken away any romantic notions Clint once might have had. But a man didn’t need a child’s fairytale dream of happily-ever-after to be loyal.

The sound of crinkling paper snapped him to attention. He looked at his hand and saw the previously smooth layers smashed into a ball. Shit. Sally was going to kill him. He set the invitation on her desk and tried straightening it out, getting as far as seeing the distorted words “Ewan Gifford’s” next to “engagement” before muttering, “Fuck it. I’ll buy her flowers,” and tossing the whole mess into the trashcan.

A unique combination of whiskey smooth and gravel rough, sometimes in the same word, Clint didn’t need to see the speaker to identify his voice. Only one man sounded like that: Hawk Black, the new deputy mayor. He’d moved into town shortly after the November election and taken over the post from a man who had decided he couldn’t wait for his boss to retire so instead he ran against him in a remarkably ugly campaign. Clint didn’t know what was more surprising: the fact that elections in Hawthorne could get contentious or the fact that a stranger was appointed such a powerful position. Then again, it was possible he paid more attention to the new arrival than other people. And not because of his job title.

Reminding himself to keep his eyes on the deputy mayor’s face and not leer at his imposing body, especially not his groin, which Clint already knew looked damn enticing in a suit, he took a deep breath, plastered a smile on his face, and turned around.

“Thanks. Those four years playing in high school are coming in handy now in trashcan basketball.”

“You have the build for playing ball.” The deputy mayor dragged his gaze from Clint’s shoulders to his feet and back up again, making Clint feel as if he were nude despite his boots, jeans, undershirt, flannel, and jacket. “Guy your size, I bet nobody could penetrate your defense.” 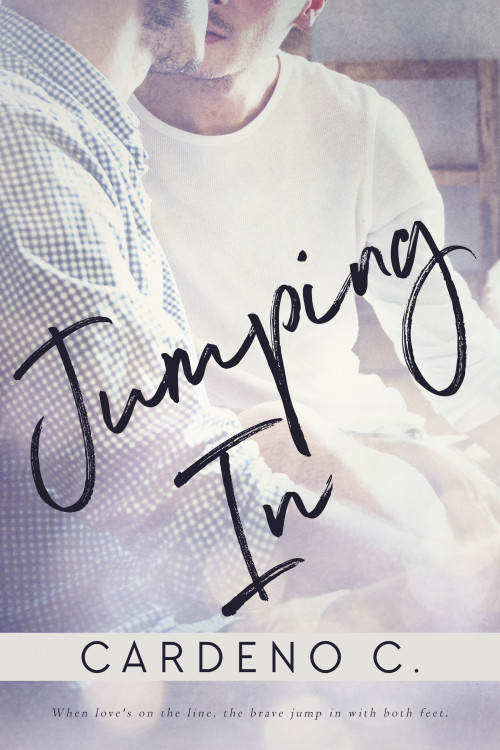