In Another Life & Eight Days

Eight Days: Childhood friends start a long-distance romance but need a holiday miracle for a happy ending. In Another Life: Shiloh will find the strength to confront his fears and build a life worth fighting for with the help of EMT Travis.

At age eighteen, Shiloh Raben is tired. He no longer has the energy to deal with mean classmates, inner doubt, and fear of familial rejection, so he takes a razor to his wrist. When he wakes up in the hospital, Shiloh meets Travis Kahn, the EMT who saved him and didn’t leave his side.

Travis is handsome, smart, and funny—the type of guy Shiloh would never be brave enough to approach. But his near-death experience has an unusual side effect: the life that flashed before his eyes wasn’t the one he had already lived, but rather the one he could live. With visions of a future by Travis’s side, Shiloh will find the strength to confront his fears and build a life worth fighting for.

Childhood family friends, Maccabe Fried and Josh Segal have always gotten along despite having nothing in common. Maccabe is an athlete with dreams of playing professional baseball. Josh is an aspiring architect with dreams of being with Maccabe. Despite all odds, both dreams come true.

Maccabe and Josh fall into a long-distance romance, which is everything Josh thought he wanted. But after years of hiding from the world, Josh wants to bring their relationship into the open. When Maccabe refuses, Josh is faced with a tough decision: stay with the man he loves or live the life he deserves. No matter the choice, somebody’s bound to get hurt. Thankfully, in the season of miracles, there’s always hope for a happy ending. 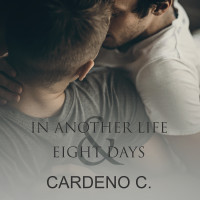 Download a FREE In Another Life & Eight Days audiobook when you sign up for an Audible 30-day free trial here!

You know how they say when you’re about to die your whole life flashes before your eyes? Well, as it turns out, it’s true. But it’s not like what you think. At least, for me it wasn’t. Because the life I saw as I lay in the bathtub taking my last breath wasn’t the one I had lived during the eighteen years I’d been on this earth. Instead, the life I saw was the one I would be missing for the next eighteen.

Funny how I had wanted to die for years, had been gathering the courage to do it, and then when the moment was finally upon me and I felt the last bit of life drain from my body, well, that was when I realized there had been something to live for all along. Or maybe I should say someone.

I must say though that when reading this light, short read, it had a dreamy quality to it. I cannot really put the right words on text, but it was like I was participating in the events that unfolded in a quality very dreamlike and quite blurry. It felt so good and in spite of the sensitive topic involved, it left me with a feeling of such great HOPE. Something which could only be felt during hopeful holidays like Christmas....There was something magical about this story that speaks of love, commitment, hope and faith. Yes, this is a very short and light read but it was bigger than the quantity of the text.  It made me think deeper and it reached out to something deeper inside me (and hopefully other readers). It teared up quite a bit but as the story was not sad, it was good tears. Hopeful tears. It was a beautiful.

This book is really about second chances and realising your opportunities when they present themselves and grasping on to them. ....I enjoyed this story a lot. It has a strong message that life is too precious to throw away and you should enjoy every day and take joy in the things you have.

This short story is filled with emotion, tenderness, heat and plenty of fluffy "aww" moments. Shiloh and Travis have a love many wish they could have and it was sweet seeing how everything turned out for the two men. Definitely recommended.